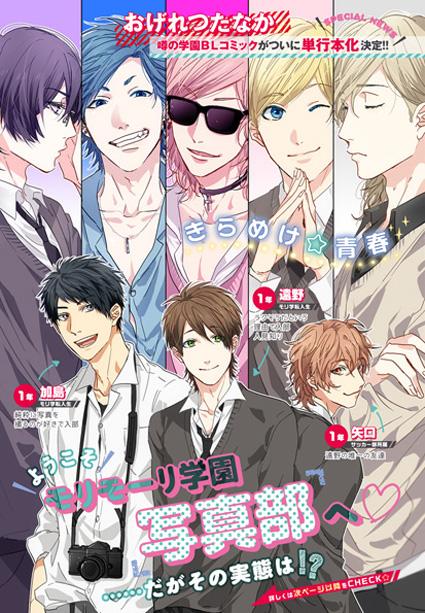 From Whitelies Fansub:
Freshmen Toono moves to Tokyo in order to transfer to an all-male-academy, surrounded by the mountains [Private Academy Mori-Mori]. Our friendly character Yaguchi is the first one to befriend him, but the lack of interest in sports coming from Toono, force him to join the photography club instead of the soccer club with Yaguchi. Not only is it called the photography club, but also “The Yarichin Bitch cub”, whose members are outstanding senpai’s. Besides Toono, there’s also a new member in the club: Kashima senpai, they both started the same day, and they don’t seem to have any problem at all, even when Toono gets confessed in the club! Toono thinks that Yaguchi is adorable, but he always ends up blushing whenever Kashima is near. But above anything else, there are feelings found between the senpai’s…